Mercenary Breed was originally presented as a space opera or sci-fi action and adventure toolkit. When I started developing the Hastilion Expanse campaign, it became very clear to me that the universal-styling of Mercenary Breed could easily be applied across multiple science fiction subgenres and themes. This could include settings, campaigns, or even individual missions. It was so easy for me to create a military sci-fi and sci-fi horror missions within the space opera campaign that when planning 2.0, I knew I wanted to expand on those ideas.

To embrace this universal application, there is an entire chapter within the Mercenary’s Handbook dedicated to applying different subgenres and themes to Mercenary Breed and how to use the mercenary framework. This 44-page chapter not only provides direction for applying different styles and themes to Mercenary Breed, it also discusses different character archetypes for those themes (to be previewed next week). This whole thing is presented in a universal way, without Savage Worlds mechanics, that it can actually be applied across the board with any science fiction game and setting.

From its beginnings, Mercenary Breed was designed to create sci-fi action and adventure with a mix of the dramatic, also known as space opera. After developing the Hastilion Expanse campaign, it became obvious that the toolkits and sandbox setting could actually be used to develop all types of science fiction settings and campaigns. It is thus that Mercenary Breed is growing out of its space opera roots to encompass a wide array of themes and flavoring for settings, missions, and campaigns.

To begin, it is imperative to understand what type of campaign (or overall setting) the GM is attempting to recreate. Does the action focus on a single planet where war is eminent? Or do the mercenaries travel across a galactic sector to perform missions that ultimately benefit the corporation?

Choosing a campaign theme is a good place to start as it establishes the framework that drives the overall story arc. This framework could be recreated as a background storyline always moving as the mercenaries perform various missions. Or it could be recreated as the underlying purpose of each mission, moving the corporation closer to the end of the campaign and the finale of their motivations. What these motivations are can alter the campaign theme, such as settlement of a new sector, expansion of the corporation across recently settled planets, or the complete domination of whatever planet they are headquartered on.

However, one thing to keep in mind is that choosing a campaign theme does not mean every single mission follows that theme. It could simply mean the campaign theme drives the back story while the mercenaries perform missions that may or may not serve to further that back story. The final design is ultimately up to the GM, but it should provide the mercenaries with a reason as to why they’ve been hired into the mercenary force.

Exploring a galaxy, or a region within a galaxy, starts with space travel. Space travel campaigns consist of exploration across unknown, uncharted, recently discovered, or even hostile environments. The purpose could range widely from searching for planets to settle to clearing the region of all hostile threats. However, at the core of every space travel campaign is a spacecraft, or fleet, designed for long trips across space without resupplying. The spacecraft must be self-sufficient and would probably contain a large number of personnel to perform all the daily mundane tasks. The term capital ship has been used previously to describe a space faring headquarters for a corporation, which would be a craft designed for housing executives and possibly deploying exploration fleets. Thus, a space travel campaign would be centered on this spacecraft or fleet.

Life aboard a spacecraft would be considerably different than life planet-side. Everyone aboard would have a purpose from simple maintenance workers and child care providers to the navigator and captain of the ship. Each mercenary would thus need a purpose that correlates to life aboard a spacecraft. This could include leaders of exploration teams, navigators, engineers, and general soldiers, but each one should provide value to the spacecraft personnel. Otherwise, why would they be hired in the first place?

Corporations exist for one reason: to make money. Once a corporation’s revenue begins to flatten or dip down, they’re bound to seek other means of increasing their revenue. For that, they need to build new facilities to mine, produce, or sell their products. Space travel allows them to find new planets to do this. What planets they choose will be completely dependent on how the corporation makes money, but there is no shortage of new possibilities out there.

New planets are opportunities for mining new resources. Newly settled planets may contain new outlets to produce products at a low price if labor is cheap. Well-populated planets may be favorable locations to sell all those products. Either way, the driving force is to find a way to increase revenue.

Another possibility is that the corporation is looking to sell resource mining opportunities to other corporations. These corporations are in charge of seeking planets with resources and ensuring a peaceful meeting with the indigenous people. 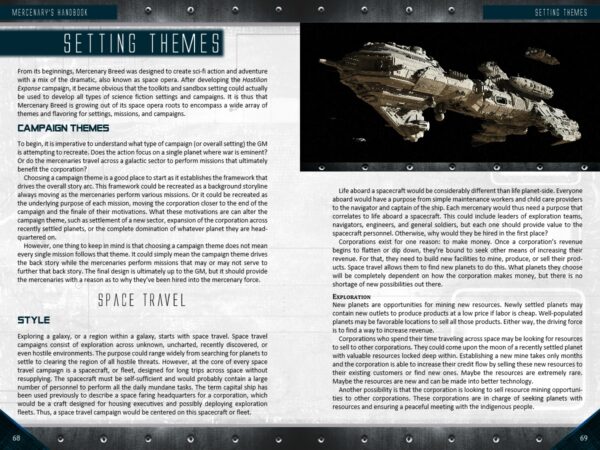