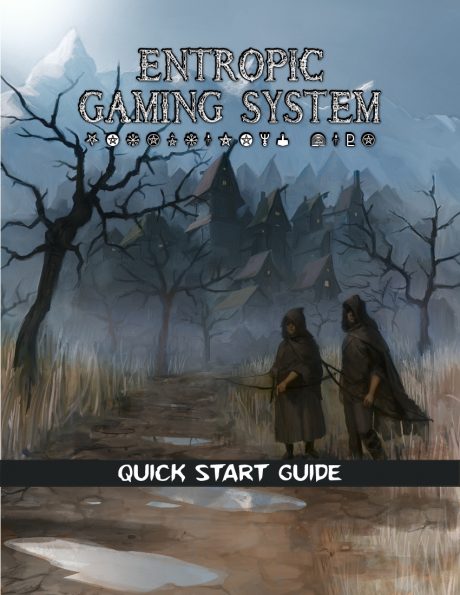 The Entropic Gaming System is a tabletop role-playing rules system for any genre and subgenre. It allows multiple eras and influencing genres to utilize the same set of mechanics with little to no changes necessary. Designed with the principle of allowing maximum flexibility with fewer rules, characters can vary widely while still retaining the depth of their background, providing players with the means to translate their character concepts into something fully usable on the tabletop.

Using an escalating dice mechanic, from d4 through d12, a combination system that allows Skills to be combined with different Abilities to produce any possible action, character Qualities that can be used in-game to produce bonuses through Hero Points, and very flexible mechanics for combat and Talents, EGS keeps the rules medium while presenting players with more options and flexibility!

Whether it’s fantasy, sci-fi, modern action, pulp, or horror, the Entropic Gaming System can handle them all! Powered by the Open Gaming License, fans and Third Party Publishers can take advantage of the simple mechanics to make EGS THEIR game.

Play in your setting, grab one of ours, or use the included adventure to start a dark fantasy campaign and experience the flexibility of the Entropic Gaming System that allows the game’s mechanics to conform to your character concept!