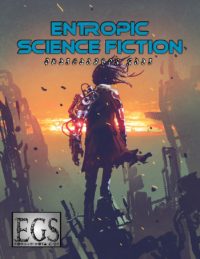 The first standalone core rulebook powered by the Entropic Gaming System 2.0 mechanics comes in the form of Entropic Science Fiction, a book for players and GMs to create characters and run games in their own science fiction galactic sandbox.

Players can choose ten unique PC cultures, high technology equipment, technology-driven Talents (science as magic), and all the character options that go along with it. GMs can utilize the extensive guidance provided, mechanics for building missions, example settings and missions, and a small bestiary to get started.