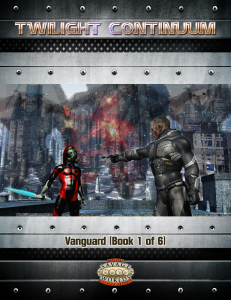 Twilight Continuum is the first Perilous Journey adventure set for Savage Worlds, featuring a high action and adventure storyline set in Earth’s near-future. Twilight Continuum follows the characters from their first days at Novice rank as fighter pilots for the Western Nations Alliance through Legendary rank as they take on the Akuma, preventing them from destroying the galaxy. This adventure set features six 72-page books with all the campaign material needed for the Game Master and all the characters’ options necessary for the players. It is a standalone adventure set that only requires the use of the Savage Worlds core rulebook and can be tweaked to fit within your favorite sci-fi setting.

Twilight Continuum is the creation of Curtis Lyon of Three Sages Games and is being developed through Mystical Throne Entertainment and their new Perilous Journey publication format. The project is being managed by Mystical Throne Entertainment president Aaron T. Huss and development is being led by Three Sages Games co-owner Curtis Lyon. The Twilight Continuum project is being funded in whole through Kickstarter and slated for delivery from July 2013 through January 2014 with a new book becoming available each month and a final, printed compilation being available after the last adventure book is published.

ABOUT MYSTICAL THRONE ENTERTAINMENT
Mystical Throne Entertainment is the publishing and creative outlet for Aaron T. Huss, is supported by a network of freelance writers and editors, and is a Savage Worlds licensee publishing unique settings and the Savage Insider magazine.

ABOUT CURTIS LYON
Curtis Lyon is a regular freelance writer for Mystical Throne Entertainment, Savage Mojo, and Gun Metal Games along with being one of the new owners of Three Sages Games.