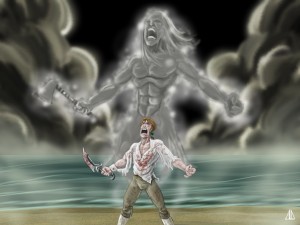 The reasons why this doesn’t make sense? There’s too much source material that can be used universally across all the modules and the various adventures don’t have to be quite so linear as long as the plot points are hit in order. This is especially true with the large amount of source material regarding New England in 1745. There’s also no reason why many of the non-plot point missions cannot be run in different orders (similar to being usable as a sandbox setting). It is thus that we have decided to change the publication model for the New World Perilous Journey campaign for Colonial Gothic:

New World will still follow the Perilous Journey model of campaign, bestiary, sourcebook, and fiction. But instead, it will be divided across four books plus a free player’s guide to complete all parts of the campaign as opposed to a single book pertaining to a single part of the campaign. Upon it’s release, the following books will become available:

This still follows the standard Perilous Journey model, but published as a single collection of four books pertaining to the campaign instead of a series of 14 books that make-up the campaign. I think this is the optimal publication model for this campaign.

The currently available New World modules will be taken down from their distribution outlets. When the four books are released, those who have already purchased one or both of these modules will receive a discount link via RPGNow. I don’t have an estimate of when those will be available at this time.