View Cart “Ultimate Age of Discovery Guide: Pirates and Privateers (Savage Worlds)” has been added to your cart. 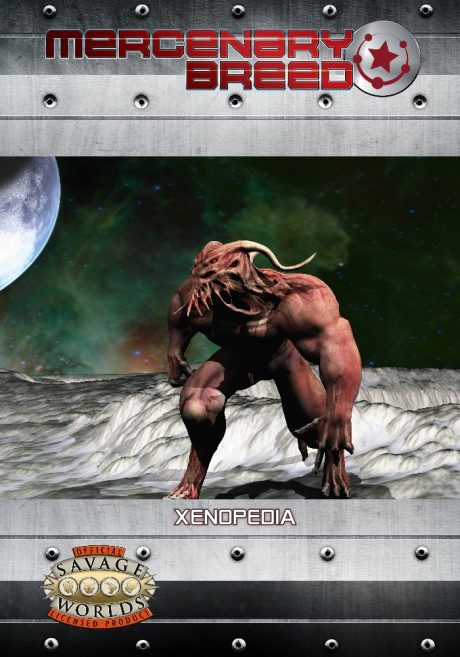 Geremiah walked toward the door. “Let’s do it then.” He tapped on the control box to open the door, then stepped back to allow Sthol to fire through.

Sthol let out a long burst of flames to cut through the mist. The noise had its intended effect as the larger creatures turned to investigate. Sthol released his handflamer and waited for them to approach. Upon seeing the first creature in the doorway, he pulled the trigger again, dousing the creature with flames.

Malakai and Theth flanked Sthol, cutting down the enflamed creature with precision. Dahn’tyu and Geremiah held back, should any get through. Two more creatures appeared and Sthol repeated the process. Only one fell from the handflamer, but the other was quickly dispatched by axe and sword. However, the creatures did not relent.

Mercenary Breed is a science fiction action and adventure toolkit and sandbox setting for Savage Worlds. The core setting set is broken into three rulebooks: Mercenary’s Handbook, Galaxy Guide, and Xenopedia. The Xenopedia is a collection of adversaries including those used in the missions and Savage Tales in the Galaxy Guide.

Although Xenopedia is designed for use with Mercenary Breed, it’s actually a completely universal science fiction adversary book, usable with any science fiction setting or campaign, published or homebrewed. The xenos listed therein don’t rely on the Mercenary’s Handbook or Galaxy Guide to be usable, although they are utilized by the Galaxy Guide. Their backgrounds and motivations can be placed within any galaxy!