View Cart “Shadowed Earth Veiled Adventures #02: The Temple of St. Benjamin (EGS) [PDF]” has been added to your cart. 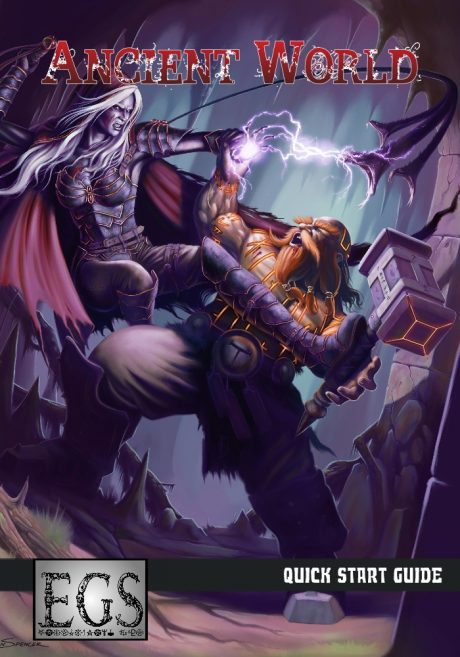 Cynric removed his bow and nocked an arrow. Feradul pointed to a tree in the distance, indicating Cynric to shoot near the creatures in the hopes of scaring them away. He let the arrow fly and it thumped into the tree next to them. A loud roar answered the arrow and one of the creatures began bouncing around angrily.
“I think we made it mad!” exclaimed Cynric.
“You think so?!” yelled Roylla. “They’ll be drawn by the glow of the fire! Prepare yourself!”
Feradul stepped back and prepared for the creatures’ arrival. He could see two shadow-like forms moving quickly toward the camp. Off to the side, two more shadows joined in.
The three warriors made a half circle around the fire, waiting for the creatures to come.

Welcome to Dhuran, a world filled with secrets and hope. Ancient World presents a dark fantasy setting where great warriors scour the land to protect the people from the denizens of the deep and the terrifying creatures that call Dhuran home. The people have spent centuries surviving a seemingly never ending blight, but a glimmer of hope shines in the distance. However, as the secrets of Dhuran’s ancient past begin to unravel, the veil begins to lift and the true perils of the Known Lands appear. Grab your weapons and armor and lead the fight to reclaim Dhuran!